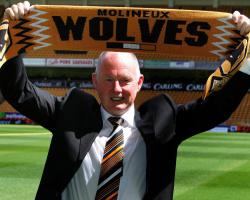 Morgan bought Wolves from Sir Jack Hayward in 2007 for ÃÂ£10 with the promise to invest ÃÂ£30million into the Molineux club.

A club statement read: "Wolverhampton Wanderers FC announces today that after eight eventful and enjoyable years at the club, and after much thought, owner and chairman Steve Morgan has decided to put his 100 per cent shareholding in the Club up for sale.

"Steve will step down from the board with immediate effect and day-to-day activities will continue to be managed by the chief executive with the current board overseeing operations.

"While the process of finding a new owner is being undertaken it is very much business as usual for the head coach, players, staff and all other stakeholders involved with Wolves.

"Steve would like to relay to all concerned that his ongoing commitment and financial support to Wolves will continue until a new owner can be found.

"He would like to thank everyone connected with the club for their support and backing over his tenure to date and, as always, wishes Wolves every success for the future.

"Steve will not be making any public comments in relation to this announcement."

Wolves are 16th in the table, having missed out on the play-offs on goal difference last season, and go to Fulham on Tuesday