Republic of Ireland defender Matt Doherty is a doubt for Wolves' Premier League clash against Huddersfield Town a week on Sunday because of a 'facial' injury.

The Irish FA confirmed on their official Twitter account that the 26-year-old has been ruled out of their games against Northern Ireland and Denmark.

Martin O'Neill's side take on rivals Northern Ireland on Thursday in an international friendly before travelling to Copenhagen for a crucial UEFA Nations League encounter.

Injury Update | Matt Doherty has been ruled out of the games against Northern Ireland and Denmark due to a facial injury picked up on club duty. #COYBIG pic.twitter.com/YbNxqXGj2X

Doherty sustained his injury during Wolves' draw at Arsenal on Sunday afternoon, with the right-back playing the full encounter.

But Tim Spiers, who is the Wolves correspondent for the Express & Star, claimed on his personal Twitter account that the Irishman could now miss his sides next Premier League fixture.

Matt Doherty has been ruled out of Ireland's games against Northern Ireland and Denmark due to the injury he picked up against Arsenal. Must now be a doubt for Wolves' game against Huddersfield a week on Sunday

Doherty has started every ​Premier League game for Nuno Espirito Santo's side this season as the Midlands outfit currently sit outside of the top 10.

During this campaign, the three-cap international has helped his side secure four clean sheets, including providing two assists and netting the winning goal away at Crystal Palace last month. 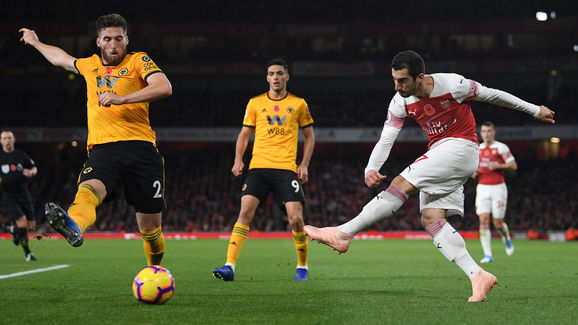 Nuno doesn't have an obvious replacement for Doherty if he misses out, but fellow left wing-back Jonny Castro can play in that position.

The on-loan Atletico Madrid player was utilised on the right side by Nuno during the club's Carabao Cup defeat to Leicester, with teenager Ruben Vinagre playing in the other fullback position.