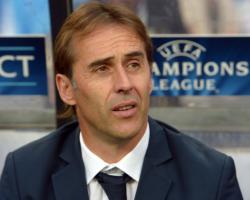 The former Spain international goalkeeper had been in regular contact with Fosun International - the Chinese consortium that bought Wanderers this summer - about replacing Kenny Jackett when their takeover was confirmed.

Lopetegui, whose Spain side face England at Wembley in a friendly on Tuesday, was keen on the role at Molineux but admits it was not a tough decision when he was asked to lead his country.

The 50-year-old, quoted in several national newspapers, said: "When the federation called, naturally my objective became the national team, but it's true that before that (Wolves and I) had been working hand in hand for some time.

"It was very close but in the end it wasn't to be.

"I enjoyed the time I spent with them; there were job offers from the Premier League but their project was especially attractive.

"Wolves is a great club, where there would be significant investment and a desire to grow, to shine again."

He added: "I'm passionate about English football; it's lived in a special way, unique

There's a culture of believing in mid and long-term projects

"Admittedly, that's changing: the division with the most (managerial) changes in the world last season was the Championship

But there's respect, a willingness to build properly, patience

"Then there's the fans' passion

The challenge of bringing something new to English football was attractive; the chance to apply some of our culture, things I thought I could help."

Paul Lambert was named as his replacement earlier this month