Mendes and his Gestifute agency represents a significant number of players who dominate the current Wolves squad, as well as manager Nuno Espirito Santo, who was the first client he ever signed up around 20 years ago. 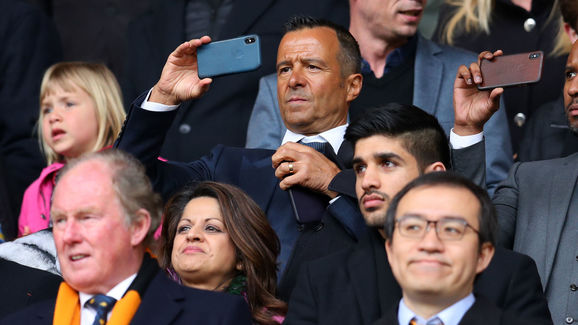 Der Spiegel details the course of events that saw Chinese company Foyo buy a stake in Mendes' agency. Foyo is said be a subsidiary of Fosun, the Chinese company that subsequently bought Wolves, followed by a number of players linked to Mendes joining the club.

Der Spiegel asserts, 'This suggests that Mendes is collecting commission payments for transfers that his own business partners have negotiated with him and his confidants,' insisting that the business model in operation would 'fail every compliance test in normal industries'.

It is stated that FA rules do not allow agents to interfere in the business of any club, directly or indirectly. It is an attempt to prevent agents from 'securing expensive transfer fees and high salaries for their own clients - and collecting big commissions for themselves.'

Wolves owner Jeff Shi has previously contested any rule breaking, insisting that Mendes is merely a friend and adviser and that the club is in charge of its own decisions.

Der Spiegel places Mendes as having been involved from the beginning of the Fosun era at Molineux, highlighting an email exchange that saw a request from the new owners in 2016 for Ivan Cavaleiro, Helder Costa and Pele to be signed before the takeover was complete. That was apparently refused by then owner Steve Morgan, leading Shi to contact Gestifute with this alleged message, "We have to wait. Please help us hold any player to join Wolves."

In another leaked email to a Gestifute employee, Shi apparently promised that Wolves would be a lucrative business partner for Mendes. It allegedly read, "You always know the reason for the investment of Wolves is mainly because of our bet and trust on Jorge. Jorge can take Wolves as the most reliable partner and agency revenue source for long, long time." Der Spiegel is clearly unimpressed by the relationship, declaring, "Does the English Football Association need any more proof than that to put an end to such a blatant conflict of interest?"

Wolves have already been investigated by the Football League (EFL) and in April 2018 the relationship with Mendes was found to ​comply with the rules. The ownership structure was also subsequently checked over by the Premier League following promotion last season.

Around the time of the EFL investigation, Wolves managing director Laurie Dalrymple ​publicly acknowledged that Mendes is close to Shi and the club but denied that rules had been broken.

Der Spiegel, however, claims 'simple loopholes' have been used, with the example given that it was Foyo that originally invested in Gestifute, yet Fosun is the company that owns Wolves. Der Spiegel notes that Wolves declined to comment, while the FA apparently replied stating that it has ensured rules were followed and had received assurances from Wolves. Shi nor Mendes responded to the publication's request for comment.