Wolves opener for Adams and Norwich 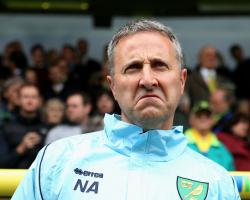 The Carrow Road board opted to give Adams the top job despite him failing to keep the Canaries in the Premier League as a caretaker, with his first chance to impress coming on August 9 at the home of Kenny Jackett's League One Champions.

The other two relegated Premier League sides also start on the road with Cardiff going to Blackburn and Fulham making the trip east to Ipswich.

Elsewhere, Leeds - expected to be under the management of former Forest Green man Dave Hockaday - start at Millwall while Sami Hyypia's first game in charge of Brighton is at home to Sheffield Wednesday.

Norwich's first home game - on August 16 - is against Watford, while Cardiff and Fulham's fans first see their men in action against Huddersfield and Millwall respectively.

The first East Anglia derby between Ipswich and Norwich is on August 23 at Portman Road - just the fourth game of the season - with the reverse clash on February 28.

A Yorkshire derby between Rotherham and Huddersfield stands out on Boxing Day - Steve Evans' Millers having already made a number of big summer signings - while Bolton will take on Blackburn in an all-Lancashire affair.

Derby go to Birmingham on the same day, Bournemouth meet Fulham, Ipswich go to Brentford and Brighton are at home to Reading

Charlton and Cardiff have been paired together, as have Leeds and Wigan, with Forest on the road at Middlesbrough, Millwall going to Norwich, Blackpool at Sheffield Wednesday and Watford at home to Wolves.

Owing to the way the calendar falls there are no New Year's Day fixtures in the new schedule, so clubs will have to wait until January 10 for their first league outings of 2015.

The pick of those fixtures sees Fulham head to Cardiff - a game billed as a six-pointer in the Premier League but did not save City, despite their win - with Brentford and Rotherham renewing rivalries formed in League One.

The Easter programme falls on Saturday April 4 and Monday April 6, by which point things should be falling in to place for the sides looking to get up to the top flight.

Norwich's Easter comprises of Brighton away and Sheffield Wednesday at home, Cardiff's is made up of Reading away and Bolton at home while Fulham host Brentford and go across London to Charlton.

Of the others expected to do well, Derby meet Watford (home) and Wigan (away), with Uwe Rosler's Athletic also travelling to Middlesbrough on the Saturday.

The season ends on May 2 with Norwich at home to Fulham in a clash with has the potential to be vital, while Cardiff go to Nottingham Forest, Derby meet Reading and Wigan go to Brentford.

Leeds finish against Rotherham, Ipswich at Blackburn, Huddersfield at Blackpool and Bolton are at home to Birmingham

Elsewhere, Charlton meet Bournemouth, Middlesbrough are at home to Brighton, Watford take on Sheffield Wednesday and Wolves and Millwall square up.