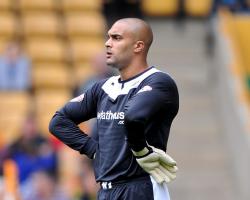 A statement from Wolves read: " The complaint relates to a small number of individuals in the crowd at Saturday's game and will not sour the good relationship that exists between the two clubs

"Both Wolves and Walsall are fiercely committed to stamping out all types of discrimination within football and will vigorously investigate all allegations of racist abuse.

"Wolves will always strongly support its players who are the victims of discrimination, and Carl Ikeme and George Elokobi both displayed admirable restraint in the face of receiving the abuse on Saturday."