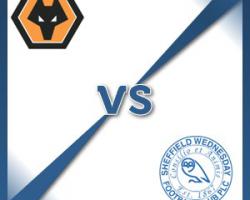 Wolverhampton V Sheff Wed - view commentary, squad, and statistics of the game live.Jackett forced into changesDominic Iorfa is out of Wolves' clash with Sheffield Wednesday with an ankle injury

Sheffield Wednesday striker Caolan Lavery could go straight into the starting line-up after being recalled from his loan spell at Chesterfield.Will Keane was forced out of Saturday's 1-1 draw with Fulham due to an ankle injury and fellow striker Sergiu Bus is still struggling with a groin problem.Stevie May will be in contention for a recall, while boss Stuart Gray has the option of playing Chris Maguire in a central role up front.Defender Liam Palmer is struggling as he also sustained an ankle injury against Fulham, while skipper Glenn Loovens (ankle), fellow defender Kamil Zayatte (hamstring) and midfielder Jose Semedo (foot) remain doubtful