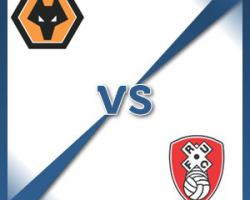 Wolverhampton V Rotherham - view commentary, squad, and statistics of the game live.Jackett to keep faithWolves head coach Kenny Jackett expects to name an unchanged squad for the visit of Rotherham

They were beaten 2-0 at Norwich in their last Sky Bet Championship game but Jackett has no new injury worries.Carl Ikeme and Tommy Rowe are both out with broken metatarsals and Kevin Doyle is still a Wolves player but is not match fit for this weekend after travelling to America to hold talks with Colorado Rapids.Jackett said: "We have two Tuesdays now and five games in 15 days so it's a really good chance to pick up a lot of points in 15 days and it's an opportunity we want to capitalise on."Rotherham will have skipper Craig Morgan back after his missed Tuesday's 3-3 draw with Derby through illness.Boss Steve Evans must decide whether to recall Morgan or stick with Kirk Broadfoot in the heart of the Millers' defence.On-loan Jack Hunt left the field on a stretcher in midweek, though his knee injury is not as bad as first feared and he has an outside chance of making the squad.The Millers hope to extend Zeki Fryers' loan deal from Crystal Palace in time

If the deal cannot be done, Evans has no other recognised left-back at the club, so defender Richard Wood or midfielder Rob Milsom would have to step in