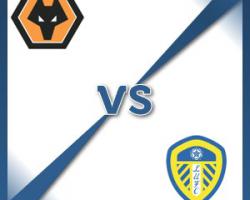 Wolverhampton V Leeds - view commentary, squad, and statistics of the game live.Leeds test too soon for RoweThe Easter Monday visit of Leeds is expected to come too soon for Wolves defender Tommy Rowe

Carl Ikeme is expected to keep his place in goal after returning from an 11-match absence with a broken foot to replace Tomasz Kuszczak in the win over Nottingham Forest, Wolves' third victory in a row that leaves them outside the play-off places on goal difference

On playing Leeds in front of the Sky Sports cameras, head coach Kenny Jackett told the club's official website: "It's a great game

I think for us now, our responsibility is to really try and get a big and passionate crowd behind us

It's only our performance level, our quality and our desire that will do that."Leeds will be without suspended midfielder Rudy Austin following his dismissal in Saturday's 3-0 home defeat to Blackburn.Austin, back in the side following a thigh injury, was shown a straight card for alleged use of the elbow and begins a three-game ban, while fellow midfielder Lewis Cook remains an injury doubt.Cook missed out on Saturday after straining ankle ligaments while on international duty for England Under-19s last week and head coach Neil Redfearn could be tempted to hand Kalvin Phillips a debut or a rare start to Chris Dawson.Defender Liam Cooper, plus strikers Billy Sharp and Mirco Antenucci are pushing for recalls