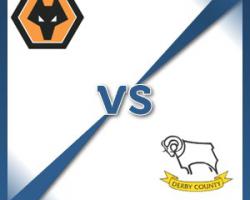 Wolverhampton V Derby - view commentary, squad, and statistics of the game live.Stearman fit for WolvesWolves' Richard Stearman is fit to face Derby despite being stretchered off in midweek

The defender suffered a dead leg in the second half of the 3-0 win over Sheffield Wednesday and had to be carried off.But he has declared himself fit and joins Dominic Iorfa in the squad after Iorfa missed the win over the Owls with an ankle problem

Carl Ikeme and Tommy Rowe are still out with long-term foot injuries.Derby head coach Steve McClaren is considering whether or not to gamble on the fitness of Darren Bent and George Thorne as he looks to get the Rams' automatic promotion challenge back on track.Both have been out injured recently

Striker Bent has missed four matches with a hamstring problem, while a thigh injury has seen central midfielder Thorne sit out the last five games - of which McClaren's men have lost three and drawn two."Darren has trained a couple of days, George has trained this morning," said McClaren at his pre-match press conference on Thursday

"It is whether we take a risk on them, and that is the debate at the moment

We are taking it hour by hour, day by day."Top scorer Chris Martin (hamstring) and midfielder John Eustace (knee) will definitely remain unavailable and centre-half Jake Buxton will miss a third game with a back problem