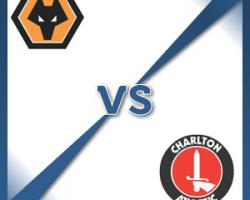 Wolverhampton V Charlton - view commentary, squad, and statistics of the game live.Golbourne fit for WolvesWolves have Scott Golbourne back for the visit of Charlton after the defender recovered from a foot injury

Tommy Rowe remains sidelined with his own broken foot, though, and is still weeks away from a return

Striker Bakary Sako is with Mali for the African Nations Cup in Equatorial Guinea.Benik Afobe could make his full debut after scoring when he came off the bench in the 2-0 win over Blackpool last week.Charlton will add Milos Veljkovic to their squad after signing the Tottenham midfielder on loan for the rest of the season.The 19-year-old Serbian could be handed an immediate debut after the Addicks were thumped 5-0 at Watford last weekend.Captain Johnnie Jackson is struggling with a calf injury, winger Franck Moussa has a knee problem and Frederic Bulot is on international duty with Gabon.Neil Etheridge is set to continue in goal with Stephen Henderson still missing with a shoulder injury