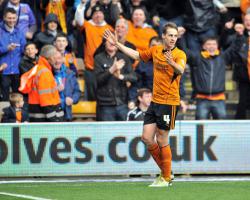 Wolverhampton V Bolton - view commentary, squad, and statistics of the game live.Jackett to keep faithWolves boss Kenny Jackett could keep faith with the same side that drew at Charlton for the visit of Bolton

Captain Sam Ricketts is still waiting for his first league appearance of the season, with his only action coming in the 3-2 League Cup defeat to Northampton in August.Wolves are on a five-game unbeaten run in the Sky Bet Championship following their 1-1 draw at The Valley on Tuesday.Bolton will have former Crewe striker Max Clayton available after signing the England youth international on a three-year contract.The highly-rated 20-year-old, who scored 16 goals in 92 games for his hometown team, was a free agent after leaving the Alex at the end of last season but a compensation package still had to be agreed with the League One club.Wanderers boss Dougie Freedman was relieved to see goalkeeper Andy Lonergan shrug off a heavy challenge from opposite number Adam Collin in Tuesday's welcome win over Rotherham.With Adam Bogdan already out with a finger injury, Freedman has been chasing the capture of former Leeds shot-stopper Paddy Kenny on a short-term deal as cover