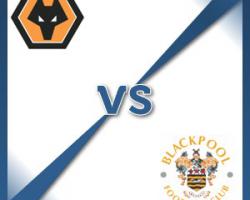 Wolverhampton V Blackpool - view commentary, squad, and statistics of the game live.Afobe set for Wolves bowWolves could hand a debut to new signing Benik Afobe against Blackpool after the striker joined from Arsenal

George Saville has joined Bristol City on loan and Liam McAlinden has re-joined Fleetwood on loan while Bakary Sako is unavailable as he is with the Mali squad at the African Nations Cup.Tommy Rowe remains sidelined after breaking his foot last month along with Scott Golbourne (foot)

Wolves are planning tributes before the game after the death of former owner Sir Jack Hayward on Tuesday.Darren O'Dea will be fit for Blackpool.The defender was forced off in the first half against Millwall with an ankle problem but manager Lee Clark has allayed fears he would miss the trip to the Midlands.Henry Cameron will come into first-team consideration again after penning professional terms this week but fellow teenagers Dom Telford and Mark Waddington will not be considered for senior selection until they follow suit.Both midfielder Jose Miguel Cubero (ankle) and defender Gary MacKenzie (knee) should be involved in a behind-closed-doors friendly next week