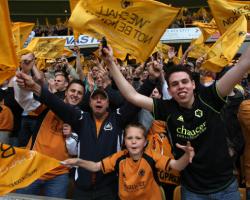 football.co.uk/match_reports/wolverhampton_preston_3632040-9.shtml">Wolverhampton 2-0 Preston: Match Report - view commentary, squad, and statistics of the game as it happened.


Wolves too strong for North End

Dave Edwards and Lee Evans combined to get Wolves' promotion push back on track with a 2-0 Sky Bet League One win against fellow high-flyers Preston at Molineux.


Kenny Jackett's side had gone into the game on the back of a run of just one win in seven games that had seen them slide out of the top two.


But a neat 28th-minute finish from Edwards and a second-half strike from Evans kick-started Wanderers' bid to make an instant return to the Championship - and in the process ended Preston's winning run.


North End had chalked up three successive wins and five victories in their last seven league matches, but Simon Grayson's side failed to produce that kind of form against Wolves.


Before breaking the deadlock, Edwards had earlier been frustrated by a goal-line clearance from Jack King.


But he was not to be denied a second time and when he was sent clear by Kevin McDonald the Welsh international beat goalkeeper Declan Rudd with a fierce near-post drive from eight yards.


Preston tried to reply immediately and Joe Garner almost embarrassed goalkeeper Aaron McCarey when his curling left-wing cross flew over the Irishman before bouncing to safety off the crossbar.


But Grayson's men lacked a real threat up front and Evans made the game safe in the 55th minute when he prodded home from close range after Rudd had pushed out a shot from James Henry.