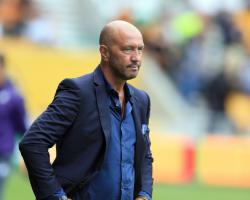 The Italian, who replaced Kenny Jackett just hours before kick-off, saw his side fall behind to Wayne Routledge's goal after 12 minutes.

Routledge, Kyle Naughton and Oliver McBurnie then struck after the break to highlight the size of the task facing Zenga.

QPR were the only Sky Bet Championship side to overcome Premier League opposition as they beat Watford 2-0 thanks to goals from forwards Sebastian Polter and Conor Washington.

Alvaro Negredo was among the scorers as Middlesbrough beat Aston Villa 3-1, Adama Diomande fired Hull to a 2-1 win at Nottingham Forest, Jordon Ibe was on target for the second weekend running as Bournemouth beat Cardiff 1-0 and Plymouth held West Brom to a goalless draw.

Charlie Austin's late goal saw Southampton finish their tour of Holland with a 1-0 triumph over FC Groningen, Fabio Borini was on target in Sunderland's 1-1 draw with Montpellier and Everton were held to the same scoreline by Real Betis.