Ten-man Wolves battle for a point at high-flying Brighton 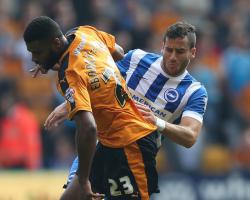 Hemed, a ÃÂ£1million signing from Almeria this summer, arrived at Molineux in a rich vein of form having scored five times in seven Championship games

This was a Premier League fixture last season but, after a summer of change at both clubs, there was little of that top-flight quality remaining on this evidence

Charlie Austin gave Rangers the lead against the run of play but Michael Dawson equalised before half-time, with both goals coming from set-pieces

At the other end of the table, Rotherham registered their first league win of the season - but despite the last-gasp 2-1 success against Cardiff they remain bottom

Rotherham took until added on time to get their first three-points of the campaign through Matthew Connolly's own goal.

Bristol City are above the Millers on goal difference after a fifth league loss of the season at home to Reading, who climb up into the top six

Fernando Forestieri, Tom Lees and Michael Turner netted for the Owls with Jamie O'Hara and Tom Cairney on target for the visitors

It was also 2-1 at Griffin Park where goals from Marco Djuricin and Lasse Vibe helped injury-ravaged Brentford come from behind to beat Preston, who scored after only 33 seconds through Daniel Johnson