Grant gaffe hands it to Wolves 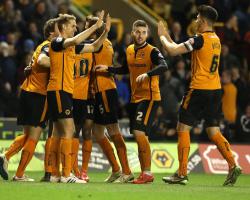 The Rams goalkeeper scored a calamitous own goal - punching the ball into his own net - after Nouha Dicko had given the hosts the lead.

Derby continue to implode and are now winless in their last six games, leaving them fifth and five points adrift of the top two having played a game more.

And Wolves are only outside the play-off spots on goal difference as they continue their promotion charge.

But Derby were furious with referee Keith Stroud when he disallowed Tom Ince's first-half goal having already blown for a foul on Darren Bent.

The striker had gone down under pressure from Danny Batth when clean through but the official failed to issue a card.

Ince hit the crossbar and Craig Bryson hit the post but there was no way back after Grant's gaffe.

And the striker had the first sight of goal during a frantic start when he was inches away from connecting with Craig Forsyth's 16th-minute cross.

Ince - after he turned down an England Under-21 call-up this week - began well, his darting runs unsettling the hosts and he came close after 24 minutes when his looping 20-yard effort clipped the crossbar

Derby were on top and thought they had opened the scoring after 40 minutes as Stroud intervened in controversial style.

Bent latched onto Lingard's through-ball and was running clean through, only to be felled by Batth, and when the ball ran free Ince fired into the net.

Referee Stroud had already blown for a free-kick yet then failed to punish Batth with even a yellow card - much to the anger of Derby boss Steve McClaren.

Kuszczak was equal to Bryson's free-kick and the Rams' sense of injustice grew three minutes after the break when Wolves took the lead.

Kevin McDonald cut out Forsyth's pass to find Dicko and the forward wriggled free on the left before shooting under Grant from 10 yards.

Derby responded and Bryson hit the post from the edge of the box, b ut the hosts almost doubled their lead after 57 minutes when, under pressure, a long ball from McDonald released Afobe and he clipped the top of the bar

Derby looked to have regained their composure but then self-destructed after 68 minutes through the clanger from Grant.

Forsyth skied Van La Parra's cross and it should have been routine for the goalkeeper but he succeeded only in punching it over his shoulder and into the net.

Damage done, Derby never recovered and Bakary Sako nearly added to their misery when he fired over in injury time.