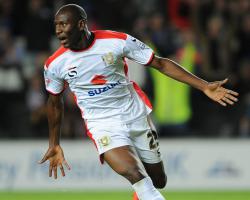 The striker has scored 31 times for MK Dons and Wolves - just one ahead of Tottenham hotshot Kane.

Afobe bagged 19 goals on loan at MK Dons before January - including two in their 4-0 League Cup win over Manchester United - and has added 12 more since joining Wolves from Arsenal on a permanent deal.

The Molineux hitman is expected to make his 50th appearance of the season at Wigan on Saturday and after his breakthrough campaign Afobe's confidence is sky high.

"At the moment we do analysis on the other team, the defenders, the keeper, and you hear this player was playing in the Premier League and has experience but I don't care at all, not one bit.

"It doesn't matter what league I'm playing in I'm going to score.

"It's the mentality you've got to change to be a top goalscorer and I've realised that.

"All the top goalscorers who score week in, week out like (Lionel) Messi and (Sergio) Aguero, they believe they are going to score before they've had a chance and that's the only difference between a top goalscorer and an average striker."

Wolves have two games left in the Sky Bet Championship and are three points outside the play-offs after Afobe's goal rescued a 1-1 draw with Ipswich on Saturday.

Kane has five matches left in the Barclays Premier League with Spurs but Afobe is focused on scoring himself and is not jealous of Kane's success after he dropped out of the top flight for regular football.

"He has five games and I have two," said the confident but grounded 22-year-old.

"I have played with a lot of these players Harry, Ross Barkley and Jack Wilshere who's my friend, but everyone has their own destiny.

I think that's another reason why I'm doing well.

"I never compare myself to any player

The way people don't succeed in life is that they worry about other people too much.

People have asked 'what's my favourite goal?' I always say 'the next one'."